As anyone with an accent and/or who doesn’t quite conform to a thankfully fast-fading stereotype of what a “real” Australian looks like, that sequence of questions is familiar, often irritatingly so. It’s also one that I haven’t been asked for many years probably almost a decade now until one night at Burning Seed around the fire.

END_OF_DOCUMENT_TOKEN_TO_BE_REPLACED 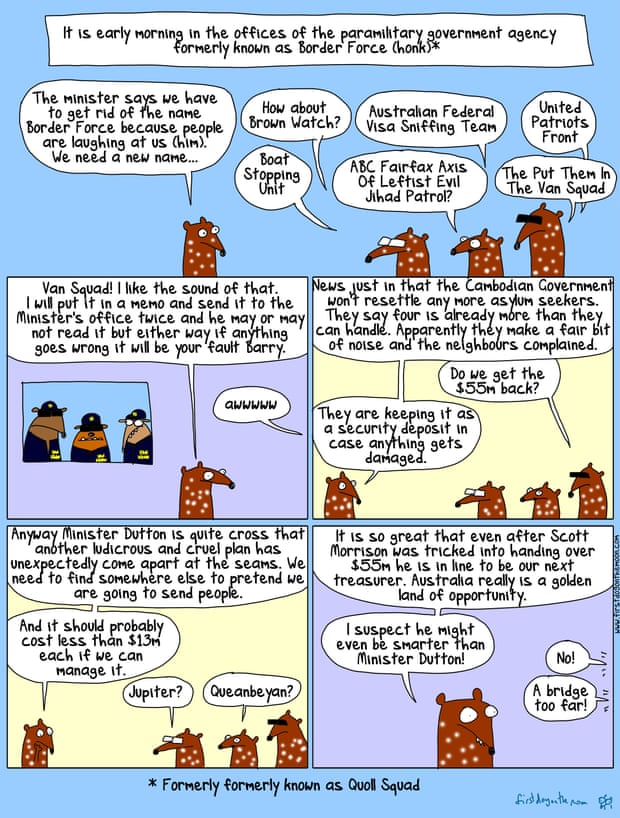 The first dog on the moon as usual gets it right about our jack-booted papers-checking “migration” officials. To be honest, when I first heard about it last Friday, I thought it was a slander perpetuated by the fringe-lefty types you see hanging around outside Student Union buildings and various street-corners. Surely, I thought, there is a limit to how low the Federal Government can sink. Turns out I was wrong. Having no leadership on the top, they have no bottom.

I also thought that I’d reached the limit to the amount of loathing I have for this government. I thought that my current state of exhausted emotional flat-lining whenever our government committed yet another idiotic heartless action was here to stay. But again, I was wrong. Border farce actually made me for the first time, fear for my personal safety in this country. No, I don’t mean that I am afraid of migrants stealing jobs or terrorists blowing me up, I am actually for the first time afraid of our government and what it might do to me.

Because, you see, I don’t buy it for a second that the release was poorly worded. I actually do believe that if Abbott had his way, there would be Feds on city corners demanding to see the passports of the non-whites walking by.

Can you tell the difference purely from appearences between Chinese, Japanese and Koreans?

I used to think I could but after doing this very interesting pictorial quiz, apparently I have no idea.

Personally, I think it’s a bit of an unfair selection of faces, perhaps selected to challenge your ideas of what members of each nation typically look like as represented in the media or by their customary mode of dress. I do often get asked if I’m japanese purely because of my more alternative appearence.

I still do think that there are ‘typical’ Japanese and Chinese features. I have very little contact with Koreans so have not got a recognition template. But it’s not surprising that there’s a lot more overlap between us all then would be expected.

In other news, it seems that my lifejournal may be reduced to these kind of infrequent posts as the novel is taking up most of my writing time.

And work is reasonably busy.

I bumped into my cousin Kate on the way back from work tonight. She’s one of the very few, actually the only one, from my family whose company I enjoy and who, even though I dont actually see her all that much, whenever I do see her, makes me think I should make more of an effort and organise more things to do with her.

Kate was born here and has a caucasion mother, a white Australian that is but referring to an earlier entry, it’s not like we have a lot of cultural similarities really. We have some peripheral values in common and while she’s not overly conservative, she is mainstream enough and has a reasonably straight up approach to life and relationships in general.

I think it is a matter of temperament. For some irrational and inexplicable reason, Kate reminds me of myself. There’s a part of me that resonates with her manner of being and that makes me identify with her. And there’s enough similarities on a biological blood-relative level, in spite of the whole cross-race thing, for me to see physical resemblances with aunts and uncles.

I’ve got a feeling that this is what a familial bond is about, it’s not an intellectual acceptance of a cultural tie, or a complex of guilt to do with responsibilities and obligation, but an irrational emotional recognition of similarity.

I just wish I felt like that about more of my biological family.

I headed to an Asian Australian meetup the other night. The people there were a mix of asian australian academics and writers, most of whom if not born in Australia were very westernised anyway as they were child migrants. I came over at the age of 18 and that made me one of the few 1st generation migrants there. Most were 2nd (born here) or 1.5 (child migrants).

The evening made me think again about my ethnicity and culture, about the choices I’ve made in terms of identity.

I have a good idea of what it means to be a proper Asian person, especially a proper Asian eldest son. That knowledge which is effectively a knowledge of its underlying values is the closest thing to an intuitive culture I have. It’s pretty much a predictable if not stereotypical picture of confucian conservatism. Behave responsibly, respect authority, care for one’s parents, work hard, earn a good living, breed. Add in a particularly difficult language and rather nice food. But other than that, not very different from good old fashioned protestant beliefs. Not very far from what most cultures would consider the values of a solid upstanding citizen either.

I dont get the slapstick humour myself but a lot of everything else is there. When I walk through very asian parts of town, I can place a lot of the immigrants there in their original context. I recognise the elements of business and culture they’ve brought with them and have a rich set of memories associated with the majority of stimulus – faces, smells, shopgoods.

That epiphany didnt really do much to shift my identity or my values. But talking to some of the people at the meetup who grew up feeling that they’ve never really been accepted here, never been totally comfortable with Australia and wondering if there is something else out there, it made me appreciate that I do actually know where I’ve come from. Sure I’ve rejected most of it (except for the food) but I have actually had the luxury of being able to do that.