The Southern Reach trilogy moved me so much that i even wrote a short blog about it three years ago. I’ve been looking forward to the movie as well but unfortunately my expectations were not met.

While the movie did successfully evoke the beauty and strangeness of the landscape within Area X, it didnt get anywhere close enough to the terrors within it and the team. The tower/tunnel, the implanted hypnotic suggestions were all missing replaced instead by pointless flashbacks to the biologist’s relationship with her husband.

Worse still was the ending which completely deviated from the books. The confrontation with an alien, the victory and then the final oh but actually the monster is still alive “revelation” felt cheap.

It’s a pity that Netflix didnt step in earlier to actually produce this movie  – maybe it would have resulted in something that might have looked less beautiful but had more substance.

This incredibly generous post from one of my favourite authors, Jeff VanderMeer, contains what the Tibetans call the heart teaching on novel writing. It’s knowledge that is gained through a lifetime of experience and then distilled into the most pithy and simple fashion.

I went to the Pitch Music and Arts Festival last weekend with a certain amount of trepidation. It is a newish festival – this year being its second. I was worried that the festival would like Rainbow Serpent and Babylon be full of aggressive, wasted bros. I was hoping that best case, it would instead like Strawberry Fields be attended by unfriendly, wasted schoolies. I had zero hopes that it would have the engaged, friendly and clean crowd that attended Tanglewood.

Fortunately, what I found instead was that while predominantly young, the crowd was there for the music. That meant that they weren’t wasted (you can’t really appreciate the subtleties of your favorite artists performance if you are wasted) and keen to talk about who they were going to see next and why. Rubbish was still a problem when compared with Tanglewood (close to zero rubbish on the d’floor and campsites) and Burning Seed (zero waste everywhere) – though not so much as Rainbow and Babylon which were frankly write-offs as far as audience waste is concerned. However at Pitch, while nowhere close to perfect, I saw many incidents of people picking up after themselves often not even their own rubbish.

The music was great – the acts they selected represented the new wave of dance music, acts that were committed to exploring and discovering new ways of expression. For the first time, I felt like I was actually at a music festival and not just at a very long party.

I will certainly be returning next year. And I am hoping that the bros will not start going there too.

After sinking way too much money into my third car, a 2002 VW transporter van, we’ve decided to finally get rid of it. It felt like a cliched bad relationship, where the errant partner promises to behave given another chance only to let you down a few months down the track. Before you know it, the best years of your life has passed. And as with most of those scenarios, the van looked so good on paper – a diesel engine with 230k km, an engine we reconditioned with a new pump. All of  it should have seen us drive it easily for the next 250k km. But instead, it just kept getting worse with a mysterious starting problem (it only starts when the engine is cold) that saw us spend another lot of money on it in a hope of finding out what is wrong. Fortunately, nobody could – so we’re getting rid of it as is for a tiny amount.

I can’t wait for electric cars to become more affordable and common-place – their mechanical simplicity  should make them much more reliable. In the meantime, we’ve bought a toyota hi-ace – the byword for reliability here in Australia. Of course it is second hand and of  course it came with a mysterious check engine light error that the mechanics think are to do with the dual fuel conversion. So it’s not the best start.

Anyway, this van follows in the vein of all my previous two: expensive, unreliable and almost the cost of the purchase price in mechanics bills.  We’ve decided to put the car into my partner’s name. She’s had much better luck. 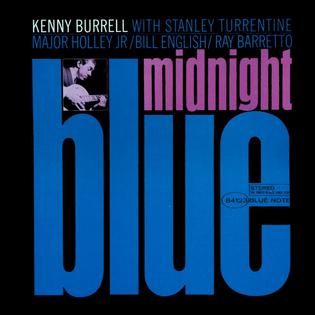 Sometime in the late nineties, I bought the Kenny Burrell album “Midnight Blue” on CD. I didnt have a lot of CDs at that time – they were very expensive and there was always the problem of trying to figure out which one to buy. Laying down twenty odd dollars for an album just because it was by an artist you’d heard off was risky. The Penguin guide to jazz was useful but idiosyncratic. There was a whole lot of ECM records that I could never get into.

Anyway, I hadn’t really listened to Midnight Blue for a long time until through the magic of Spotify, the title track came on via a Afro Cuban Lounge playlist in which it clearly did not belong. The track took me right back to my late twenties in the front room in a shared house on Faraday Street in Carlton and my emotional landscape at that time: excitement, confusion, fear, sadness. I was alone in a way I hadn’t really understood could be possible.

Looking over my backyard at the forest reserve beyond, I realised how often I felt like that in my twenties and thirties and how long it has been since I’ve been in that state. And I was glad of it and grateful.